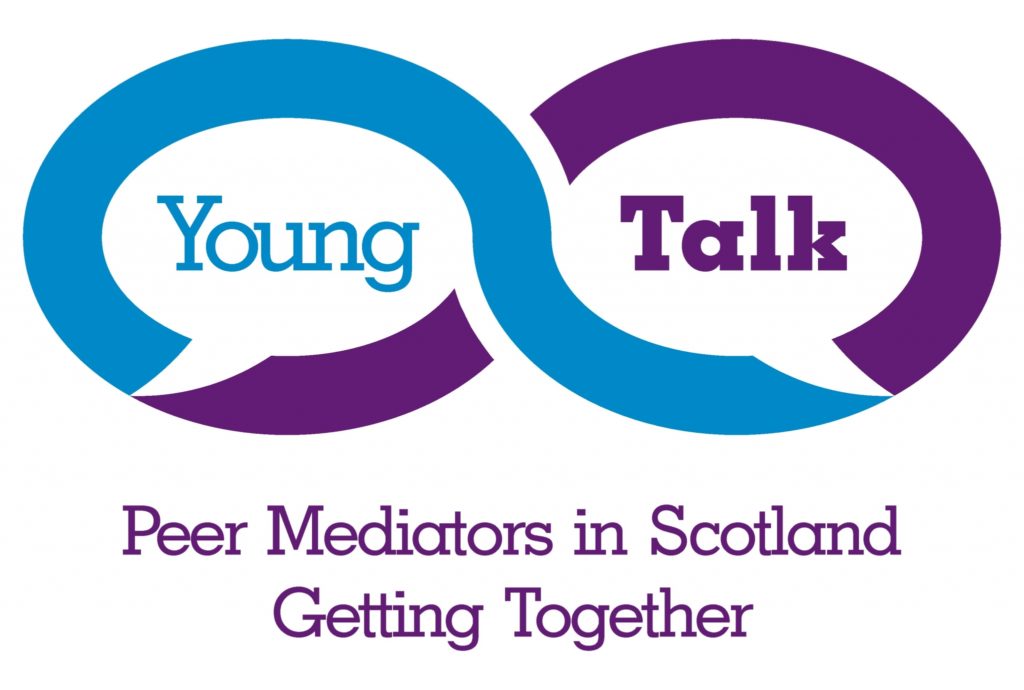 At the start of September, a remarkable gathering is taking place in Dundee bringing over 100 young people, teachers and mediators together. Young Talk a network for Peer Mediators in Scotland is holding a conference to celebrate the success of mediation in schools, to share experiences and to learn from the work that is taking place.

Young Talk exists to promote and support peer mediation as a preventative and restorative conflict resolution practice in schools and youth organisations in Scotland. The network was established in 2015 and is in the second year of support from the Big Lottery and is supported by schools across Scotland.

A key reason for having the conference is to draw attention to peer mediation. Work has been taking place with many stakeholders including the Scottish Government to see how peer mediation can be an integral part of the curriculum in schools. Its potential to give young people conversation, listening and questioning skills and to be a positive intervention against bullying and harassment would be an investment in the future. To that end Young Talk are delighted to have Tam Baillie the Children’s Commissioner for Scotland open the conference.

The conference agenda itself shows some of the diversity of the issues being considered by Young Talk and also the collaborative nature of the work that is being undertaken. We’re delighted to have a mediation magician Nick Patel present to the conference. Nick’s key theme is that things are not always what they seem and that the skills of listening and asking open questions are very important in identifying the situation people are in.

During the conference there will also be workshops on empowering conversations using mediation skills, cooperative and competitive approaches to conflict resolution and critically in terms of the future sharing mediation experiences between schools. Integral to the approach is bringing mediators from a range of disciplines to join the peer mediators. Through this form of collaboration, it is anticipated that the learning will be in all directions.

The Chair of the conference is Carol Hope, someone who has been a beacon for peer mediation not only in Scotland but across the globe. She has trained many of Scotland’s peer mediators and peer mediation trainers and has great insight into how peer mediation works. When asked if school students find it difficult to learn how to mediate her response would be that they learn very quickly as they are less inhibited than adults. Perhaps some of Carol’s most exciting work was in using peer mediation with looked after children in West Lothian. That work pointed not only to the immediate benefits of peer mediation skills for young people but also its potential as a way of improving attainment in schools.

It is very appropriate that the conference is taking place at the University of Dundee as they have pioneered an inclusive, organisation wide approach to mediation. That approach led in 2008 to the establishment of Early Dispute Resolution a service which mediates disputes across the University which is run and staffed by staff and students at the University.

That the University is hosting the conference supports one of the key themes of ensuring the sustainability of peer mediation in schools. With the many issues that schools face it can sometimes be difficult to find space for peer mediation and to retain the wonderful staff who support the schemes in individual schools. In order to help schools, the idea of building clusters of mediation involving both primary and secondary schools and linking them to mediators and mediation organisations in the local community has been developed. In Dundee the University and its mediators have supported this work and helped to make strong links with the schools. There’s an added benefit in this work around access to education which could be very powerful.

After the conference our concentration will be on securing future funding to further develop peer mediation in Scotland. Much of the case for funding will be evident at the conference. Our job will be to articulate the outcomes of the work on peer mediation in a way which is irresistible both to funders and to government. From what I’ve seen already there will be many positive outcomes for us to talk about and I’m sure the conference will identify some that as yet haven’t been thought of.