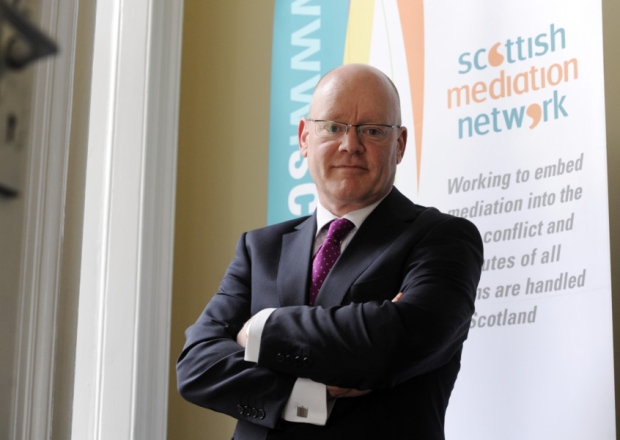 When I first studied mediation what struck me was that whilst the skills I was learning would help people find solutions to their disputes, that they also had a much wider application. In the six years I have now been working for Scottish Mediation the examples of the positive use of the wider skills continues to grow, and in places that I had never imagined.
I was recently at a meeting of Community Mediators in Glasgow and we heard an excellent presentation from the mediators at North Lanarkshire Council. As is the case for many community mediators working for local authorities, their work goes beyond neighbourhood disputes and there are great examples across Scotland of successful collaborative working involving mediators.
In North Lanarkshire the work that was presented came about initially through some creative problem solving. One of the key performance indicators used for social housing is the number of voids, properties not occupied. A high void rate was identified with young people living in shared housing. Tennants were not able to maintain their tenancies and were becoming the subject of antisocial behaviour orders and ultimately eviction.

This led a social work colleague to get in touch with a mediator to see if they might work together to help the young people concerned. Their focus was on how to maintain their tenancies and as a result both reduce voids and the chances of homelessness. The resulting approach was both innovative and has so far been successful. It centers on giving young people the necessary life skills to support them living in shared accommodation both in terms of relationships within the accommodation and critically with neighbours too.

The crux of the approach was that instead of telling the young people the rules for living in shared accommodation, they were asked to create their own rules and standards of behaviour. In doing so the approach encouraged the prospective tenants to look at issues such as stereotypes about them and others living nearby. Walking in other people’s shoes was a good way of getting people to think about how their behaviours might be perceived and how talking about issues could really help. Advice was given on how to communicate, how not to and the consequences when communications don’t work well.

One of the key challenges in carrying out this work was the approach and how to make sure the prospective tenants would engage at all. A universal approach was taken using schools and building in a session for all new prospective tenants. The programme has made efforts to specifically include people with behavioural issues that might lead to difficulties.
In designing the programme previous experience from social work indicated that a lot of the work should be visual with short sessions to maintain as high a level of engagement as possible.
Initial results from the work being piloted have been very encouraging and have seen a drop off in void rates for young people’s tenancies. Voids cost council’s money as does a high turnover of tenancies, so savings will be made from what has not been a huge investment. That in itself is a great result and I think the benefits are likely to be even greater in the long run. The first is likely to be a reduction in young homelessness as with more sustainable tenancies the likelihood of people becoming homeless will reduce. The cost of supporting homelessness can be significant. However, for me it’s not all about money. By helping people to relate better to each other and their neighbours there is an opportunity to create communities that see less conflict and helps to create better environments for everyone to live in. Those relational skills are also likely to feed into work, families and friendships with positive long-term consequences.
The experience of North Lanarkshire should be an encouragement for all of us to identify and then embrace opportunities to use mediation skills in collaboration with others. The scope for delivering benefits will be wider than you might first imagine.